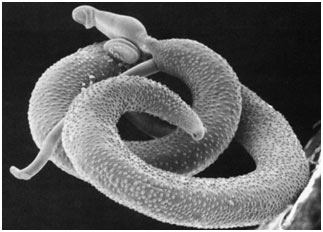 The schistosomes or blood flukes are parasitic flatworms; which contain pumping mouths for sucking blood from their hosts and belong to the order Strigeatida. These are different from other members of the order, in that they have separate sexes. The term schistosome or Schistosoma means split body. It is due to the fact that the males have a ventral groove called gynecophoral canal. The function of this canal is to transfer hormones or nutrients from males to females or vice versa.

Adults of the family schistosomatidae are found in the blood vessels of vertebrates which include both birds and mammals and feed on blood. Thus, commonly known as blood flukes. The blood flukes are related to humans primarily for the fact that they cause many medical problems in tropical and subtropical areas of the world. Plus, these parasitic flatworms are economically important parasites of cattle and other large domesticated animals.

As parasites of humans or other animals they live in venules, usually in the lower abdomen where they copulate and the females lay eggs that reach the outside either in feces or urine. There is only a single intermediate host – a snail and fork-tailed cercariae reach the definitive host by actively penetrating the unbroken skin.

Distribution of Blood flukes in world

Schistosomes can generally be found in the Philippines, Middle East, East Asia, Venezuela, Brazil, Africa, etc. The human schistosomes are distributed across some of the countries with lower economic scale. Many tropical and subtropical countries of Africa which already battling severe economic problems are widely handicapped by infections and breakouts caused by blood flukes.

According to research, in Tanzania, 20% of people have serious damages to the urinary system due to infections caused by blood flukes.

One of the most typical species of schistosomes are S. guineensis, S. haematobiumalso called bladder fluke, S. mansoni which is frequently called swamp high temperature, and S. japonicum, whose common name is blood fluke. These are slender worms that are about 16 mm long which can be identified by both male and female attributes. The females are rounded and slender and 15 to 30 % longer than males.

The males have a lateral extension of the body posterior to the ventral sucker called the gynecophoral canal. The eggs can be identified on the basis of size and other features. One of the most distinctive characters in them is the spine. In S. haematobium, the spine is terminal. In S. mansoni, it is sub-terminal and in S. japonicum, it is a small knob as well as a sub-terminal.

Schistosomes have an intricate life process, in which cercariae, free-living in freshwater, can penetrate healthy human skin. The head of the cercaria transforms into an endoparasitic larva, the schistomule. The schistomules pass numerous days in the skin after that go into the venous blood circulation and ultimately migrate to the lungs (typically within 5 to 7 days of penetration). 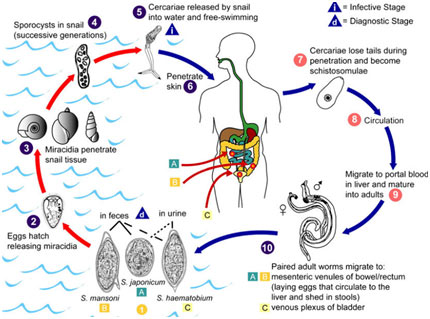 Eggs are eliminated with feces or urine. Under optimum conditions, the eggs hatch out and release miracidia, which swim and penetrate certain snail, intermediate hosts. The stages in the snail include 2 generations of sporocysts and the production of cercariae. Upon release from the snail, the infective cercariae swim, permeates the skin of the human host, and also sheds their forked tail, becoming schistosomulae. The schistosomulae move with numerous cells as well as stages to their house in the capillaries.

The females deposit eggs in the little venules of the portal and also perivesical systems. The eggs are relocated considerably toward the lumen of the intestine as well as of the bladder and ureters and are eliminated with feces or urine, respectively.