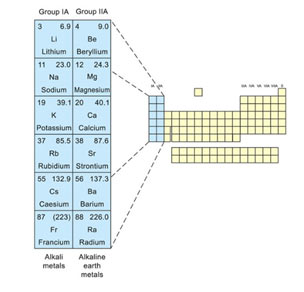 What are S- Block Elements?

The name alkali came from Arabic, which means ‘The Ashes’. The Arabs used this term for these metals because they found that the ashes of plants were made up chiefly of salt and potassium. Alkali metals consist of the elements, lithium, sodium, potassium, rubidium, caesium and francium.

These are very reactive metals, produce strong alkaline solutions with water. The alkaline-earth metals are beryllium, magnesium, calcium, strontium, barium and radium. They are called alkaline-earth because they produce alkalies in water and are widely distributed in earth’s crust.

The alkali and alkaline-earth metals include the most reactive electropositive elements and a study of their electronic configuration will assist in understanding their properties.

In going down a group, the number of shells increases by one at each step and equal to the number of the period to which the elements belong.

The occurrence of Alkali Metals

Lithium deposits, typically in the form of complicated minerals, are commonly spread over the earth. An important commercial source of lithium is the mineral spodumene, LiAl (SiO3)2. Percentages of rubidium and caesium are discovered in potassium salts deposits. Francium has actually not been discovered in nature. It has actually been prepared artificially in the laboratory and is very unsteady so that very little is known about this metal. 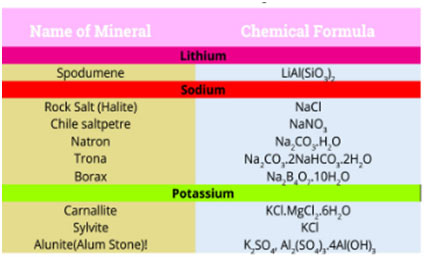 The occurrence of Alkaline-Earth Metals

Being really reactive, alkaline earth metals also do not occur in a free state. The substances of these metals occur commonly in nature. Magnesium and calcium are really abundant in earth’s crust. The outer portion of the earth was originally in the form of silicates and aluminosilicates of alkaline-earth metals.

Magnesium and calcium, with salt and potassium, exist in the rocks as cations. Magnesium halides are found in seawater. Magnesium is an essential constituent of chlorophyll.

Calcium phosphate, Ca3(PO4) 2 and calcium fluoride, CaF2 are also found as minerals. Calcium is a necessary constituent of numerous living organisms. It takes place as a skeletal product in bones, teeth, sea-shells and eggshells. Radium is a rare element. It is of great interest because of its radioactive nature. 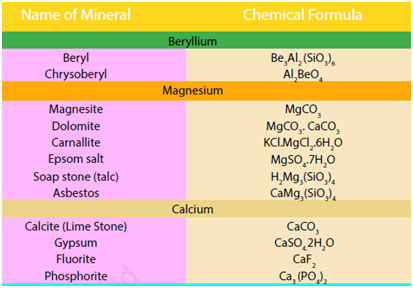 In a number of its properties, lithium is rather different from the other alkali metals. This behaviour is not unusual, due to the fact that the very first member of each main group of the periodic table reveals marked deviation from the regular patterns of the group as a whole.

The deviation revealed by lithium can be explained on the basis of its small radius and high charge density. The nuclear charge of Li+ ion is screened only by a shell of 2 electrons. The so-called ‘anomalous’ properties of lithium are due to the fact that lithium is unexpectedly far less electropositive than sodium. A few of the more crucial distinctions of lithium from other alkali metals are listed below:

Beryllium is the lightest member of the series and differs from the other group IIA elements in numerous ways. This is due to its small atomic size and relatively high electronegativity value. The bottom lines of difference are: