The solid material forming Earth’s crust is called rock. It is an aggregation of minerals. It may be composed of entirely of a single mineral such as in Rock Salt. But mostly rocks are made up of two or more types of minerals. Granite, for example, is made up of feldspar, quartz, and mica.

Rocks are of three principal types namely Igneous, Sedimentary and Metamorphic. These exhibit a rock cycle, a process of transformation of one rock type into another.

These rocks are formed by the cooling of molten material called ‘magma’ which originates at depths as great as 200 kilometers in the interior of the earth. This process called crystallization may occur either beneath the Earth’s surface or following an eruption at the surface. The magma consists of silicate minerals and gases. The igneous rocks thus may be of two types i.e., Volcanic or Plutonic. 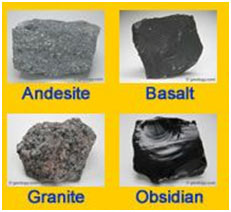 If magma breaks through the surface it follows in the form of lava. The larva gradually solidifies forming the volcanic rocks.

The magma not able to breakthrough eventually crystallizes below the surface forming plutonic rocks.

Lava is similar to magma except that during eruption most of its gaseous components escape out. Both volcanic and plutonic rocks are crystalline and do not form layers as in the case of sedimentary rocks. An example of igneous rocks is Granite.

When igneous or any other pre-existing rocks become exposed to the surface, they undergo weathering and erosion in which rocks disintegrate and decompose. The resulting material is picked up by water, wind, glaciers or waves i.e., eroded and transported, and is deposited in beds of oceans or other large bodies of water and deserts. 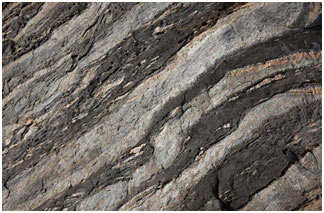 When water flows down the mountain slopes or through plains after the rain, it carries along with it much suspended matter as sand or slit. When water is quiet, the sediments begin to settle down slowly on the bottom of oceans or lakes.

Later on, this sediment hardens into rocks. As more sediments settle down and harden, they form successive layers or strata of rocks, a process that may take millions of years. Such rocks are called Sedimentary or Stratified rocks.

Metamorphic rocks mean changed rocks. The igneous or sedimentary rocks when subjected to intense heat, pressure, and weight in the presence of water and gases, they change into metamorphic rocks. During this process, the texture and mineral composition of rock may be partly or completely altered. 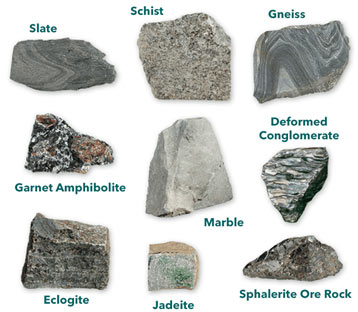 Rocks change as a result of natural processes that are happening regularly. Most changes occur very gradually; many take place below the Earth’s surface, so we might not also notice the changes. Although we might not see the adjustments, the physical and chemical properties of rocks are continuously transforming in a natural, continuous cycle called the rock cycle. 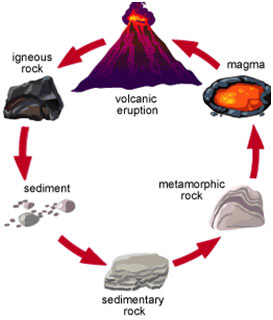