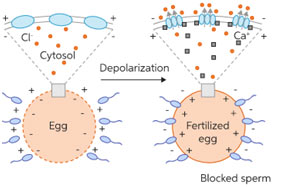 The fertilization of an ovum by more than one sperm. The egg is fertilized then one sperm leads to have more than two copies of each chromosome– one from the ovum as well as one each from the sperms.

The resulting zygote is commonly inviable. Polyspermy is a lethal condition where more than one sperm interacts with the female nucleus.

The entrance of more than one sperm into the vitellus at fertilizing– is frequently considered a pathological process in mammals, with the ramification that it results in very early deterioration of the embryo.

The access of the sperm into the egg triggers the egg. Although many sperm attaches to the egg surface, it is necessary that only one sperm goes into the egg(monospermy).

Entry of more than one sperm(polyspermy) may result in numerous abnormalities such as polyploidy, unusual mechanism of chromosomal separation throughout the cellular division, and utmost death of the embryo.

Organisms have developed ways to prevent the union of more than two haploid nuclei.

In fishes, the sperm can only enter the egg just via the narrow opening, the micropyle, the rest of the egg being covered by impermeable chorion.

In sea urchins, there is a limitation on the number of sperm that are able to penetrate the extracellular coats and fuse with the egg.

In mammals, the sperm needs to move the lengthy female reproductive system to reach the egg, and further, structural adjustments and modifications in zona pellucida block polyspermy.

A. The fast and temporary block to polyspermy

The quick block is a short-term step, which is moderated by a transient depolarization of the egg plasma membrane, brought on by sperm-egg fusion. Within 1-3 secs after the entrance of the first sperm, the electric membrane potential throughout the egg plasma membrane changes from -70 mv to +20 mv. This is done by the increase of sodium ions into the egg that lasts for around one minute after which the membrane potential goes back to its original level.

Some acrosomal proteins of sperm open the sodium channels in the egg that triggers an influx of sodium ions into the egg and depolarizes the egg membrane. This results in the fast block to polyspermy. 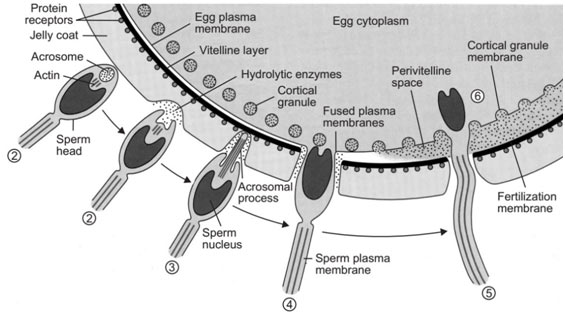 B. The slow and permanent block to polyspermy

Sperm entrance into the egg causes the release of intracellular calcium ions that are stored in the endoplasmic reticulum in the egg cortex. The calcium ions are first released at the site of sperm entry and soon, a wave of calcium ions passes through the entire egg.

This wave of released calcium ions starts a cortical reaction. The cortical reaction consists of a wave of exocytosis of cortical granules, which exist simply beneath the plasma membrane in the mature egg.

Numerous proteins are released by this cortical granule exocytosis, which is as follows:

Proteases are released, destroy the bonds that bind the vitelline envelope to the egg plasma membrane. This develops a perivitelline area. These enzymes also clip off the bindin receptors and any kind of sperm attached to it

Glycosaminoglycans are released, generate an osmotic flow that causes water to rush into the perivitelline space. As a result, the vitelline envelope increases and is elevated. It currently becomes fertilizing envelope.

A 3rd protein, a peroxidase enzyme released throughout the cortical reaction, sets the fertilizing envelope by cross-linking tyrosine residues on surrounding proteins of the fertilization envelope.

Lastly, cortical granule protein; hyaline, develops a covering around the egg. The egg plasma membrane abides by this protein and gives assistance for blastomeres during cleavage. Both fertilization envelope and hyaline layer protect against further sperm from binding to the egg plasma membrane.

Difference in Cortical Reactions of Mammals and Sea Urchin