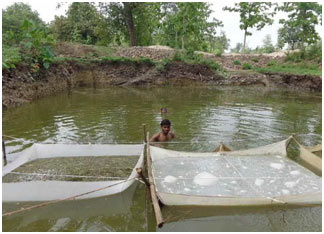 Water quality determines not only how well fish will grow in a farming culture, but also whether they survive. Some water quality factors are more likely to be included with fish losses such as dissolved oxygen, temperature, as well as ammonia. Other factors such as pH, alkalinity, hardness, and clearness affect fish but generally are not directly hazardous.

The measure of H+ concentration is called pHand its scale ranges from 0-14. The pH of neutral water is 7. An increase in H+ ions results in a higher acidic pH value. The pH of pond water undergoes a diurnal change, it is being alkaline in the mid-afternoon and acidic just before the day breaks.

The pH of neutral water is greatly influenced by CO2 concentration, an acidic compound. Phytoplankton and other aquatic vegetations remove CO2 from the water during photosynthesis, so the pH of a water body rises during the day and falls during the night.

Waters with pH 6. 5-9 at daybreak are considered best for fish production. The acid and alkaline death points for pond fish are approximately pH 4 and 11, respectively. Even though fish may survive, production will be poor in ponds with early morning pH values between 4 & 6 and afternoon pH between 9 & 10.

Average fish production is expected when the pH of a pond ranges between 7.5-8.5. Swingle stated that acidic water reduces the appetite and growth of fish. Fishes are more prone to the attack of parasites and diseases in acidic water.

To maintain the pH of the fish culture pond, liming is done and the most common liming materials are limestone, hydrated lime, and quick lime. Limestones are commonly used in fish ponds. The fish pond having pH 11 or 12 shows higher alkalinity. In such cases, the pH of fish pond water may be reduced by using agricultural gypsum.

The term salinity refers to the total concentration of all the dissolved ions in natural water expressed in mg/l or ppm (parts per million).

The osmotic pressure of water increases with increasing salinity. Fish species differ in their osmotic pressure requirements, so the optimum salinity for fish culture differs to some extent with species. Fishes are highly sensitive to sudden changes in salinity. Fish living in water at one concentration of salinity should not be suddenly placed in water with much higher or lower salinity.

Small fishes are more susceptible than adult fishes to sudden changes in salinity. Sodium chloride may be used to raise the salinity in fish-holding facilities and also even in tiny speculative fish ponds.

Salinity values in ponds of arid regions often range between 500 and 2500mg/L and much higher values are often encountered. Seawater has a high salinity of 35,000mg/L, so the salinity of brackish water ponds reflects the degree of dilution of seawater with freshwater. Salinities over 45,000 mg/L are challenging for even aquatic species to endure.

Hardness is defined as the total of soluble calcium and magnesium salts present in the water medium, which is expressed as its CaCO3 equivalent.

Bicarbonates of calcium and magnesium cause temporary hardness. Permanent hardness is due to soluble Ca and Mg carbonates and salts of inorganic acids (CaSO4). Swingle has suggested that a total of 50 ppm CaCO3 is equivalent to being the dividing line between hard and soft water. pond water having a hardness of 15mg/L or above are satisfactory for the growth of fish.

Ammonia reaches pond water as a product of fish metabolism and decomposition of organic matter by bacteria. In water, ammonia occurs in two forms, unionized ammonia, and ammonium ion. Unionized ammonia is toxic to fishes yet the ammonium ion is safe other than at very high concentrations.

The pH and temperature of water regulate the proportion of total ammonia which occurs in unionized form. In water having residual chlorine, ammonia may prove highly toxic to fishes because ammonia reacting with chlorine may form chloroammine, a toxic compound for the survival of fishes.  NH3 concentration permitted for fish farming is 0.1mg/L.

Calcium is essential for metabolic processes in all living organisms and as a structural or skeletal material in many. Lakes are classified as “poor”,”medium”, and “abundant” relying on their calcium content in mg/L, being less than 10, between 10-25, and more than 25 respectively.  Water poor in calcium, shrimps, and mollusks are either rare or absent. An important role of calcium is its effect on pH.

Dissolved oxygen is of primary importance both as a regulator of metabolic procedures of plants and animals and as an indication of water problems. The fish culture water receives oxygen mostly through:

Concentrations of DO appear to be lowest in the early morning just after sunrise, increase during daylight hours to the maximum in the late afternoon, and decrease again during the night.  Low DO concentration adversely affects fishes even at levels that do not cause mortality, making them more susceptible to parasites and diseases. For average or good production, ponds should have to DO concentrations above 5.5 mg/L.