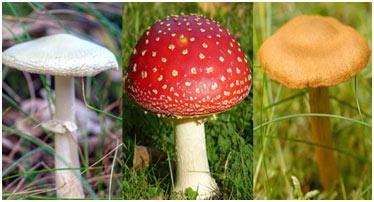 Mushrooms are a popular food used in numerous cuisines worldwide. Though their close resemblance to edible mushrooms can be misleading, some mushrooms are poisonous. There are over 70 species of poisonous mushrooms, a few of them even cause death. Some people are not able to tolerate these harmful mushrooms and establish allergies, and the consumption of other species can even cause death.

Though the list of mushrooms with proven, consistent toxicity is little, we should know beforehand which ones to avoid to prevent “mycetism”, that is mushroom poisoning. In this article, we will look at the top 10 most commonly misidentified ones so you can avoid them. To start, follow the caution of this threatening quote:

“Only a few mushrooms will kill you; most will just make you wish you were dead.”

It is this lethal poisonous mushroom that has actually been responsible for the majority of human deaths both accidental and on purpose. The death cap is native to Europe where it is present in forests, frequently under oak trees. It resembles a number of edible mushrooms, most notably the paddy straw mushroom which is consumed throughout Asia. For this reason, it has caught out a number of negligent immigrants from Asian nations where it does not grow. The main poisonous representative is a-amanitin (amatoxin). This can cause irreparable damage to the liver and kidneys.

Destroying Angels are incredibly poisonous mushroom species. They belong to the genus Amanita and include the deadly amatoxins. Amanita bisporigera, found in The United States and Canada is the most toxic of them all. Destroying Angels look very similar to the meadow and the edible button mushrooms. Due to this, many individuals who have actually by mistake consumed them have dealt with fatal effects. Their all-white look is kind of deceiving and for that reason, the highest level of preventative measures need to be taken here. Usually, it takes approximately 5 to 24 hours for the symptoms to appear. Some most typical of them are vomiting, diarrhea, kidney failure, delirium, and liver destruction.

The false morel is a mushroom species that resembles the true morels from the genus Morchella. This species of fungus is scientifically known as Gyromitra esculenta. The mushrooms are known to be tasty but deadly if eaten fresh as they contain monomethylhydrazine. Some individuals are not harmed by eating false morel while others establish severe toxicity and possible long-term health risks. Found all over the Northern Hemisphere, even in the Arctic and in some parts of Australia, the Autumn Skullcap grows itself on dead wood. They are gilled mushrooms and look very similar to the edible mushroom species. For this, they have actually been responsible for many human deaths. Individuals typically confuse Autumn Skullcap with the edible velour foot, sheathed wood tuft, honey fungus, and hallucinogenic psilocybe mushrooms. Like the other toxic mushrooms, Galerina Marginata is also covered with amatoxins. Vomiting, diarrhea, liver damage, and hypothermia are some of the common signs among others. The impacted individual needs to right away be provided proper treatment.

The ivory funnel is a toadstool mushroom found in lawns and grassy locations in Europe and North America. The ivory funnel contains harmful levels of muscarine. This mushroom species is small, with a cap of a size of about 2-4 cm. Its stripe is about 2-3.5 cm high and 0.5-1 cm broad. Muscarine poisoning causes increased salivation, tear flow, and sweating following 15-30 minutes of its intake. Intake of large amounts can cause extreme stomach discomfort, nausea, blurred vision, diarrhea, and labored breathing. The level of intoxications decreases after 2 hours, deaths are rare, however, in serious cases, death can happen due to heart and breathing failure.

Cortinarius rubellus, typically called Death Webcap, is undoubtedly one of the deadliest mushrooms ever found. They have a similar appearance to many edible mushroom species however in fact contain orellanine toxin. Orellanine is a deadly contaminant and has a relatively long latency duration. It generally takes 2 days to even 3 weeks after intake, to cause any sort of symptoms. Often, orellanine is misdiagnosed, ultimately resulting in kidney failure and even death if not treated right away.

The fool’s mushroom, scientifically called Amanita verna, is a lethal poisonous fungus from the genus Amanita. This fungi species grows during spring in Europe on deciduous and coniferous trees. The caps, gills, and stipe of the fool’s mushroom are all white in color. Like the death cap mushroom, the fool’s mushroom includes the alpha-amanitin substance that is extremely harmful. Ingestion of this toxic substance causes kidney and liver failure. This uncommon fungus is native to Asia and has been responsible for a variety of fatalities in Japan and Korea. Its red fruiting bodies consist of potent toxins referred to as trichothecene mycotoxins and can trigger several organ failures in those unlucky sufficient to consume them. Signs of poisoning consist of stomach discomfort, peeling skin, hair loss, low blood pressure, liver necrosis, intense kidney failure, and result in death if left untreated. Podostroma cornu-damae is an uncommon fungus that houses a fatal contaminant in its fruit body.

Found throughout the Northern Hemisphere angel wing gets its name first of all from how it looks and second of all due to the fact that eating it offers a good chance of sending you heaven-bound. The angel wing was at one time considered edible and it appears that for several years there were no reported poisonings from consuming it. That altered in 2004 when nearly 60 individuals became ill after eating them across Japan. Out of these 17 died during the following six weeks. The mode of toxicity isn’t well understood in these fungi but a unique amino acid has been recognized that kills the brain cells of lab animals. It is likewise possible that the fungi include raised levels of cyanide.

Further Reading:  Most Incredible Animals Delighting in the Night Life

Fly Agaric, scientifically called Amanita Muscaria is another poisonous mushroom species. With the immediately visible bright red cap with white spots, this fungus appears to have straight come out of a fairy tale. It really looks attractive and stunning. Fly Agaric consists of two primary toxic substances, out of which one is ibotenic acid and the other is muscimol. Some pieces of evidence even reveal that these mushrooms were deliberately utilized in ancient rituals, for they lead to crazy habits after intoxication. Symptoms typically happen after an hour of consumption and include nausea, hallucinations, and even impacts the central nervous system.