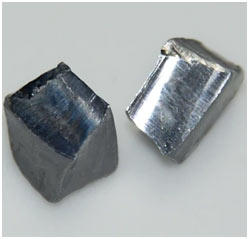 Lead is the heaviest member of the carbon family. Lead is a bluish-white lustrous metal. It is extremely soft, extremely malleable, ductile, and a relatively poor conductor of electricity. It is very resistant to corrosion however tarnishes upon exposure to air. Lead is a naturally occurring component and belongs to Group 14 (IVA) of the periodic table. Natural lead is a mixture of four stable isotopes, 208Pb (51– 53%), 206Pb (23.5– − 27%), 207Pb (20.5– 23%), and 204Pb (1.35– 1.5%). Lead isotopes are the stable decay product of 3 naturally radioactive components: 206Pb from uranium, 207Pb from actinium, and 208Pb from thorium.

Lead is not a particularly abundant element, but its ore deposits are easily available and extensively dispersed throughout the world. Its properties, such as deterioration resistance, density, and low melting point, make it a familiar metal in pipelines, solder, weights, and storage batteries.

Lead is among just a couple of elements known to ancient peoples. Among the earliest examples of lead is a small statue found in Egypt. It was made during the First Dynasty, in about 3400 B.C.Lead has been mined for more than 6,000 years, and the metal and its compounds have been used throughout history. Small lead nuggets have been discovered in pre-Columbian Peru, Yucatan, and Guatemala.

The Greeks mined lead on a large scale from 650 onwards and not only understood how to obtain the metal however how to convert this to white lead. Because of its exceptional covering power, this was the basis of paints for more than 2000 years, till the middle of the last century.

The Romans employed lead on a large scale, mining it mainly in Spain and Britain, and using it likewise for water pipes, coffins, pewter tableware, and to debase their silver coinage. While its mining declined in the Dark Ages it came back in Medieval times and found new uses, such as pottery glazes, bullets, and printing type. In the last century, it was a fuel additive.

Lead is a heavy, soft, gray solid. It is both ductile and malleable. Ductile implies efficiency in being drawn into thin wires. Malleable means are efficient in being hammered into thin sheets. It has a shiny surface when first cut, however, it gradually stains (rusts) and dulls. Lead is easily worked. “Working” a metal indicates flexing, cutting, shaping, pulling, and otherwise altering the shape of the metal.

Lead is a reasonably active metal. It liquifies gradually in water and in many cold acids. It reacts more rapidly with hot acids. It does not react with oxygen in the air readily and does not burn.

Native lead is uncommon in nature. Presently lead is normally found in ore with zinc, silver, and copper and it is extracted together with these metals. The main lead mineral in Galena (PbS) and there are also deposits of cerussite and anglesite which are mined. Galena is mined in Australia, which produces 19% of the world’s new lead, followed by the U.S.A., China, Peru’ and Canada. Some is likewise mined in Mexico and West Germany. 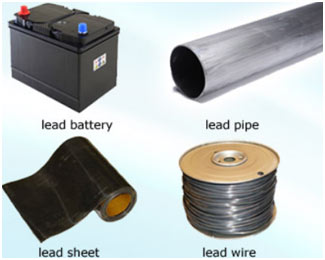 This easily worked and corrosion-resistant metal has actually been used for pipes, pewter, and paint given that Roman times. It has actually likewise been utilized in lead glazes for pottery and, in this century, insecticides, hair dyes and as an anti-knocking additive for fuel. All these uses have actually now been banned, replaced, or dissuaded as lead is known to be harmful to health, particularly that of kids.

It is typically utilized to keep corrosive liquids. It is also often utilized in architecture, for roofing, and in stained glass windows.

Lead Compounds and Their Uses

It is black powder, acquired on heating plumbous oxalate in the absence of air.

Pb2O is broken down by heat into Pb and PbO. Aside from pigment, it is likewise used in the manufacture of lead storage batteries.

Litharge varies in color from pale yellow to reddish yellow, potentially owing to the presence of two kinds, a rhombic (yellow) and a tetragonal (red). It is slightly soluble in water. It is normally utilized in preparing flint glass and paints. If the litharge is boiled with water and olive oil, lead oleate which is a sticky adhesive mass is formed and glycerin enters the solution. Litharge is utilized in preparing oils and varnishes and in the manufacturing of flint glass.

When lead is heated in air at about 340 ° C, it absorbs oxygen and forms an intense scarlet crystalline powder of read lead or minium.

Lead dioxide is a reddish-brown powder. It is not really soluble in water; however, it does dissolve in alkaline water to yield soluble plumbates. It is not impacted by dilute acids.

Fundamental lead carbonate 2PbCO3. Pb(OH) 2 is an amorphous white pigment. It mixes readily with linseed oil and has excellent covering power. If poorly prepared, it becomes crystalline and its covering power is decreased. White lead is not suitable for use as a good pigment given that it is darkened by the hydrogen sulfides which are regularly present in the atmosphere.

It can accumulate in the body and cause severe health problems. It is harmful, teratogenic (interrupts the development of an embryo or fetus), and carcinogenic. Lead can trigger numerous unwanted results, such as: