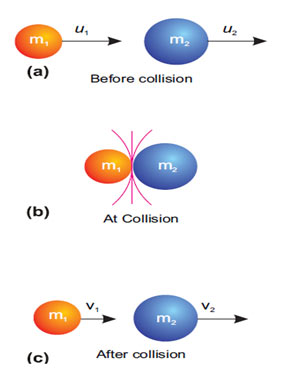 Law of Conservation of Momentum

The momentum of an isolated system of two or more than two interacting bodies remains constant.

Let consider an isolated system of two spheres of masses m1 and m2. They are moving in a straight line with initial velocities u1 and u2 respectively, such that u1 is greater than u2. The sphere of mass m1 approaches the sphere of mass m2 as they move.

After at some point mass m1 strikes m2 with some force. According to Newton’s third law of motion, m2 applies an equivalent and opposite reacting force on m1. Let their speeds end up being v1 and v2 respectively after a collision. Then

According to the law of conservation of momentum

Example of Law of Conservation of Momentum

According to the law of conservation of momentum, the total momentum of the gun and the bullet will likewise be absolutely zero after the gun is fired. 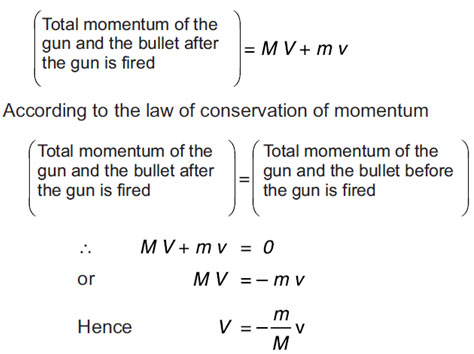 Rockets and jet engines also work on the exact same principle. In these makers, hot gases produced by the burning of fuel rush out with large momentum. The machines acquire an equivalent and opposite momentum. This enables them to move with really high speeds.