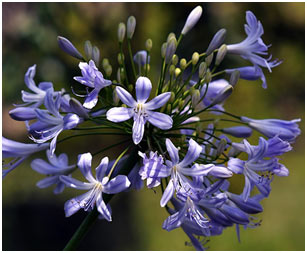 The method of arrangement of a group of flowers is known as inflorescence. Most plants develop inflorescence but small flowers are inconspicuous so they collect together to form inflorescence.

In this case, the inflorescence forms at the apex of the main branches. The main axis continues into the axis of inflorescence.

In this case, inflorescence forms on the branches.

The inflorescence may be simple, compound, or mixed.

The inflorescence in which the main axis develops lateral flowers and continues to grow indefinitely up to the last flower is called a racemose inflorescence. The main axis is monopodial. The flowers are developed in acropetal succession. 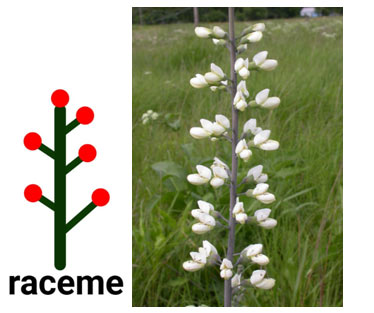 In this type, the main axis soon ends is a flower. It gives one or two lateral branches or daughter axis, each of which ends in flower. This process repeated several times. The daughter axis arises in the axil of bracteoles.

The flowers are borne in basipetal succession. The terminal flower is the oldest and the lateral flowers are younger and forms clusters. The young flowers are present towards periphery and old flowers are in central region of cluster. 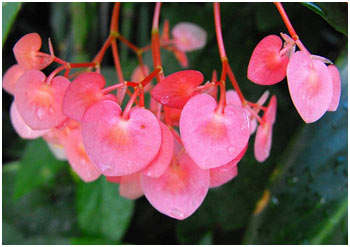 The type of inflorescence in which the main axis is branched and bears flowers, in the same manner, is called a compound inflorescence. It may be:

The main axis is racemosely branched and branches develop pedicellate flowers in a racemose manner.

The main axis of the inflorescence bears small lateral spikes or spikelets.

A branched umbel is called a compound umbel. The branches arise from the main axis from the primary umbel. The flowers arise from each branch from secondary or partial amber. Bracts may be present.

The type of inflorescence in which both racemose and cymose branching occurs is called a mixed inflorescence. It has the following forms:

i. Panicle of spikelets:

Spikelets are arranged on a panicle branching. Example: wheat.

Paired secondary axis starts at biparous. But later it becomes uniparous which develops whorls of the sessile flower forming verticillaster.

The main axis is branched in a racemose manner and each branch terminates in a capitulum.

In some inflorescences, daughter axes are surpassed. So, the flowers are crowded together in several groups. It is difficult to determine the type of inflorescence in them. Therefore, they are called special inflorescences. It has the following types:

It looks like a single flower but in actual it is an inflorescence. Many axes are reduced in it. Complete suppression of petals and sepals occurs in flowers. The main axis ends in a central reduced female flower. The female flower ripens first and then the male ripens.

The bracts in the floral region are opposite. Each bract contains a cluster of sessile flowers on its axis. The two clusters at the node form whorl-like arrangements called verticillaster. The cluster of flowers is a biparous cyme at first. Suppression of one or two branches occurs in it and it becomes uniparous.

It is present in onion and garlic. A long leafless stalk arises in the midst of radical leaves. This stalk bears a cluster of flowers at its upper end. These flowers appear to form umbel. In actuality, they form helicoid cymose clusters. That is why these are called umbellate cymose head.