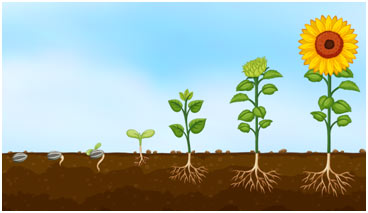 Growth and Development in Plants

A plant has a development pattern called open growth. Throughout life, the plant includes new organs such as branches, leaves, and roots, enlarging from the tips of roots and shoot but the rate of growth is not uniform throughout the plant body.

In the beginning, the growth is slow, but slowly it becomes fast, attains a maximum, then slowly decreases. In vascular plants, growth occurs through the activity of meristems. Meristems are young tissues or groups of cells that keep the potential to divide. In lower plants, the whole plant body can grow, but in higher plants, the whole plant body is not capable of growing but development is limited to certain areas referred to as growing points.

These meristematic cells are located at the stem and root and they are of the following types.

These are the parts of apical meristem that get separated from the pinnacle by permanent tissues. They are situated at the bases of internodes in many plants. They play an important function in the production of leaves and flowers. These are of temporary nature. Lateral meristems are cylinders of dividing cells. They are present in dicots and gymnosperms. Vascular and cork cambium are examples of the lateral meristem. They play an essential role in the increase in the size of stem and root and in secondary growth are determinate i.e. they grow to a particular size and after that stop e.g. leaves, flowers and fruits; while others are indeterminate i.e. they- grow by meristems that continually renew themselves, staying youthful e.g. vegetative root and stem. (i) Primary Growth:  Primary tissue is added by the apical meristem.

(ii) Secondary Growth: Secondary tissue is added by the intercalary or vascular cambium causing an increase in density.

The growth of the multicellular plants is divided into 4 stages, cellular division, elongation, maturation, and differentiation.

During cell division, the number of cells increases by mitosis. It occurs at the tip of the root and shoots where cells are small, have spherical nuclei lying in the center of the cytoplasm, which is non-vacuolated. As a result of cellular division, each daughter cell proceeds to increase the size. Synthesis of cytoplasm and cell wall material likewise takes place in this zone.

A little distance from the apex of root and shoot lies in the zone of elongation and is only of few millimeters in length. During elongation, the cell volume increases up to 150 fold due to the uptake of water. Plasticity of the cell wall increases and wall pressure is lowered. Synthesis of new cytoplasm and cell wall material continues. During maturation, the final size of a given type of cell is attained. The cells which develop into pith, cortex, and particular other tissues do not elongate further along the axis, while other cells like fibers and tracheids extend lengthwise more than in other directions.

When cell enhancement ceases, the procedure of differentiation starts. Throughout this development stage the walls of cells become thicker, the walls of lots of kinds of cells and tissues end up being pitted; thickening appears on the walls of xylem vessels, cells of different tissues differ in spatial dimensions and numerous new structural features develop.

The growth rate is influenced by a number of aspects both external and internal. External aspects are temperature level, light, oxygen, carbon dioxide, water, nutrition, and so on, while internal elements are hormonal agents, vitamins, etc.

(ii) Light: Light plays an extremely essential function in the growth of plants. By light, we imply the fractions of light, which is taken in by plants throughout photosynthesis. Normally, light influences development in three ways; intensity, quality, and duration. The increase in the intensity of light increases the number of cell divisions. The red light favors the elongation of cells and blue light improves cell division but slows down cell enlargement.

(iii) Oxygen: For effective growth, a regular supply of oxygen is needed. Without oxygen, no metabolic activity is possible and no growth occurs. A really high supply of oxygen, however, prevents growth.

(iv) CO2:We knowCO2 is necessary for performing the typical process of photosynthesis however a really high concentration of it can retard growth.

(v) Water: By absorbing water, the cells elongate. The plant growth stops in the absence of water.

(ii) Vitamins: Vitamins are organic compounds synthesized within the plant bodies in the existence of light. If the plants are grown in dark, the vitamin deficiencies are induced and the development of the plant body ceases.