When the non-sister chromatids of homologous chromosomes exchange segments between them during meiosis is called crossing over.

Linked genes can be separated by crossing over. When genes are on closer loci, they are strongly linked. If the genes lie farther apart, the chance of their separation through crossing over is greater.

Process of Crossing Over

Let say, there is a pair of the single homologous chromosome which pair up lengthwise. This is point to point and locus to locus pairing. One homologue carries genes A and B. Another homologue has a and b. 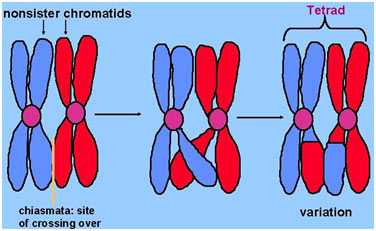 Thus, chances of occurring crossing over are reduced. In such cases, only one crossing over can occur and this is what we called a single cross over.

Further Reading:  Human Eye - Structure and Disorders of the Eye

It is a rare type of genetic recombination. It may occur in some types of somatic cells during mitosis. Mitotic crossover may occur in organisms that do not contain the cycle of sexual reproduction.

But it can only occur in diploid cells and pair of chromosomes is required for the crossover. The mitotic crossover produces homozygous allele combinations in all heterozygous genes located on that chromosome arm.

So, when a mitotic crossover takes place, the genes that were previously recessive are expressed creating a new phenotype. Mitotic crossovers occur in some asexually reproducing fungi and in human cancer cells.

Crossing Over in Drosophila

Let’s take the example of crossing over in drosophila. Linked genes are located on the same chromosome so, they do not assort independently. They move together during meiosis and fertilization.

Therefore, linked genes should not recombine by the assortments of alleles. But, in fact, recombination between linked genes occurs.

The actual results are different from both these expectations. Most of the offspring had parental phenotypes. It suggests a linkage between the two genes. But about 17 % of the flies were recombinant. Thus, linkage appeared incomplete.