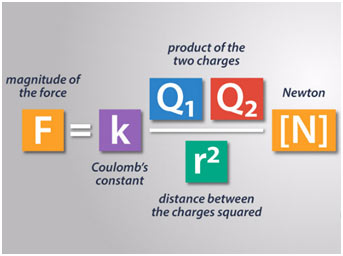 What is Coulomb’s Law about?

Coulomb’s law (likewise called Coulomb’s inverse-square law) is a law of physics that specifies the amount of force in between two stationary, electrically charged particles (known as the electrostatic force). Coulomb’s law was discovered by Charles-Augustin de Coulomb in 1785. Hence the law and the associated formula were called after him.

Let us suppose, Q1 and Q2 are the electrical charges of two objects. The distance between the charges is ‘r’, and the force of attraction or repulsion in between them is ‘F’. Then Coulomb’s law equation gives a precise description of the force between two objects whenever the things act as point charges. A charged performing sphere connects with other charged things as though all of its charges lay at its center. While the charge is uniformly spread out throughout the surface of the sphere, the center of charge can be considered to be the center of the sphere.

Limitations of the Law

The law applies just for the point charges at rest.