There has been a wide range of atomic models throughout the history of atomic physics, that refers primarily to a period from the beginning of the 19th century to the very first half of the 20th century. Here are some standard atomic models.

John Dalton was an English scientist, who came up with an idea that all matter is made up of really small things. It was the very first total effort to explain all matter in regard to particles. He called these particles atoms and formed an atomic theory. In this theory, he declares that:

After the discovery of an electron in 1897, people understood that atoms are made up of even smaller particles. Quickly after in 1904 J. J. Thomson proposed his famous “plum pudding model”. In this model, atoms were understood to include negatively charged electrons, nevertheless, the atomic nucleus had not been discovered yet.

Thomson understood that the atom had an overall neutral charge. He thought that there need to be something to counterbalance the negative charge of an electron. He came up with an idea that negative particles are floating within a soup of scattered positive charge. His model is typically called the plum pudding model, because of his similarity to a popular English dessert.

Rutherford carried out the ‘Gold Foil’ experiment to comprehend how negative and positive charges could exist side-by-side in an atom. He bombarded alpha particles on a 0.00004 cm thick gold foil. Alpha particles are given off by radioactive elements like radium and polonium.

These are in fact helium nuclei (He2+). They can penetrate through matter to some extent. He observed the impacts of- particles on a photographic plate or a screen coated with zinc sulphide. He proved that the ‘plum-pudding’ model of the atom was not accurate.

Observations made by Rutherford were as follows: 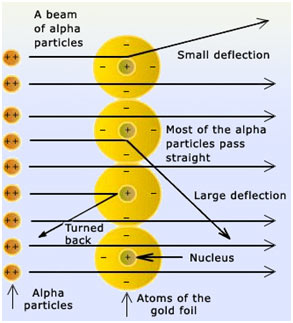 Outcomes of the experiment

Keeping in view the experiment, Rutherford proposed a planetary model for an atom and concluded the following outcomes:

Other than electrons, all other fundamental particles that lie within the nucleus, are referred to as nucleons.

Although Rutherford’s experiment showed that the ‘plum-pudding’ model of an atom was not correct, yet it had the following problems:

Keeping in view the defects in Rutherford’s Atomic Model, Neil Bohr provided another model of the atom in 1913.

The Quantum Theory of Max Planck was utilized as the foundation for this model According to Bohr’s model, revolving electron in an atom does not soak up or release energy continuously. The energy of a revolving electron is ‘quantized’ as it revolves just in orbits of fixed energy, called ‘energy levels’ by him. 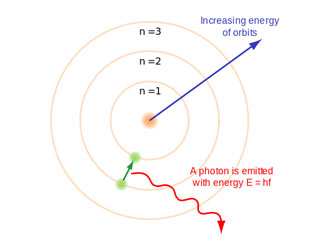 The Bohr’s atomic model was based upon the following postulates:

i. The hydrogen atom includes a small nucleus and electrons are revolving in one of the circular orbits of radius ‘r’ around the nucleus.

ii. Each orbit has set energy that is quantized.

iii. As long as electron stays in a particular orbit, it does not emit or absorb energy. The energy is released or taken in just when electron leaps from one orbit to another.

v. Electron can revolve just in orbits of a fixed angular moment mvr, given as:

Where ‘n’ is the quantum number or orbit number having values 1,2,3 and so on.