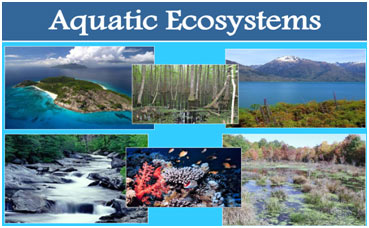 A hydrospheric ecosystem is a “system in the water where living and non-living elements or biotic and abiotic factors exchange materials and transfer of energy also takes place within water“.

Salt-water ocean and sea are the largest ecosystems on the earth forming about 71% of its surface. Freshwater ecosystems, in contrast, covers less than 1%. The distinct properties of water lend some common features to water or Hydrospheric ecosystems are the following:

Water changes its temperature level slower than air, so the temperature in the aquatic ecosystem is more moderate to support life.

Although water may appear quite transparent, it takes in a significant quantity of light energy from the sun that sustains life. Even in the clearest water, the intensity of light declines rapidly with depth, so at the depth of 600 feet or more, a little light is left to support photosynthesis.

The nutrients in the marine environment tend to be concentrated near the bottom sediments supporting life where light levels frequently are too low to support photosynthesis.

Water is an essential requirement for life. It is available generously in the marine ecosystem to support life. The significant aspects that determine the quantity and kind of life in water environments are energy and nutrient. Favorable temperature is present in the marine environment to carry out all metabolic procedures.

The rate of production of new biomass during the unit time is called productivity.

Identification of productivity: The productivity can be indicated by the usage of CO2 and the release of oxygen in the process of photosynthesis.

Determination of productivity: The productivity of the aquatic community is generally determined by the light and nutrients. Light intensity and quality differ with the water depth, so the primary productivity also varies with the light. The quantity of nutrients also changes with the season. Performance likewise varies from zone to zone.

Zones in a Lake Ecosystem 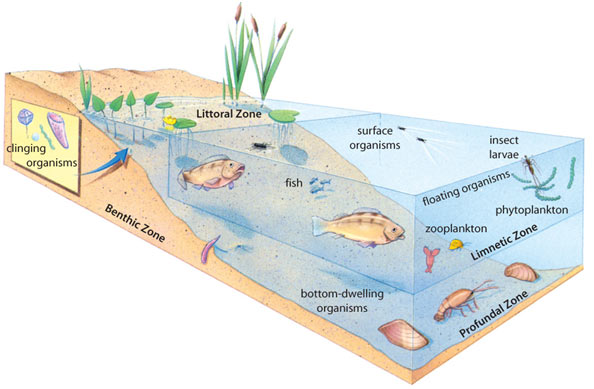 The distribution of life in lakes relies on:

The lake ecosystem can be divided into three primary zones.

The shallow water region near the shore, with light permeating to the bottom, is called the littoral zone.

Plants in this zone

Plants find plentiful light, anchorage, and sufficient nutrients from the bottom sediments. Plants in littoral zone ecosystems are the most varied; water lilies and entirely submerged vascular plants and algae flourish at the inmost area of the littoral zone. The plants of this zone trap sediments carried by stream, increasing the nutrient material in this region. Living among the anchored plants are tiny organisms called plankton. These can be divided into two groups.

Zooplankton (Greek “drifting animals”): such as protozoa and tiny crustaceans.

Animals in this zone

The greatest variety of animals in the lake is likewise found in this zone. Littoral invertebrate animals consist of small crustaceans, insect larvae, snails flatworms, Hydra and littoral vertebrates include frogs, marine snakes, and turtles.

As the water increases in depth further from the shore, plants are not able to anchor to the bottom and still gather sufficient light for photosynthesis. This open water area is divided into two areas: the upper limnetic zone and the lower profundal zone. 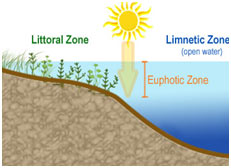 The open water zone far from the coast/shore to the depth of reliable light penetration is called the limnetic zone. In this zone, enough light penetrates to support photosynthesis.

Life in the Limnetic zone:

This zone is inhabited by phytoplankton, zooplankton, and fishes.

Fishes: The fishes are found entirely in a totally free-swimming zone which consume protozoa and small crustaceans.

The zone of the deep water under the limnetic zone which is beyond the reach of light penetration is called the profundal zone.

The light is insufficient to support photosynthesis. So, the organisms of this zone are mainly nurtured by fragments that fall from the littoral and limnetic zone and by incoming sediment. Decomposers and detritus feeders, such as snails and certain insect larvae, bacteria, fungi, and fishes, populate it. 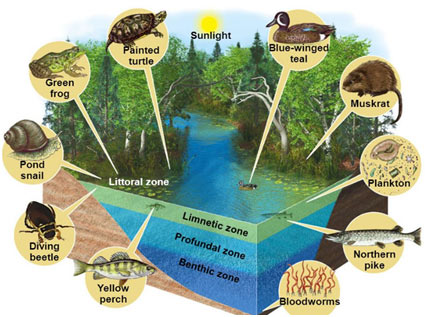 The intervention of Man in Aquatic Ecosystem

Human activities may considerably speed up the procedure of eutrophication (adequate nutrition) because nutrients are brought into lakes from farm feedlots and sewage.

Even if solid wastes are removed, water released from the sewage treatment plants is typically abundant in phosphate and nitrates dissolved from wastes and cleaning agents. Rainwater washes of fertilizer from fields where the manure of countless cattle is accumulated. The water for that reason becomes extremely enriched.

The added nutrients support the excessive development of phytoplankton. Producers like blue-green algae form a scum on the lake surface, depriving the submerged plants of sunlight; as a result, they die. The dead plant’s bodies are decomposed by bacteria, utilizing the oxygen present in the water, deprived of oxygen, fish, snails, and insect larvae also die. 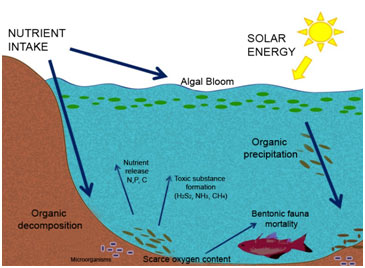 Although it is full of life and nutrients, a contaminated lake smells bad. The majority of the trophic levels consisting of the fish are gotten rid of and the bacteria and blue-green algae dominate the ecosystem.

Another really severe reason for contaminated water is the acid produced by the burning of fossil fuels, which presents a different danger to the fresh-water environment. Only a few of organisms can hold up against the low pH of acidified lakes. 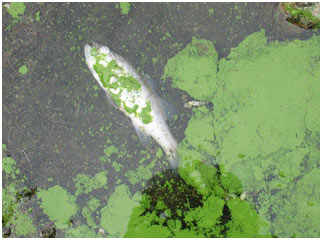